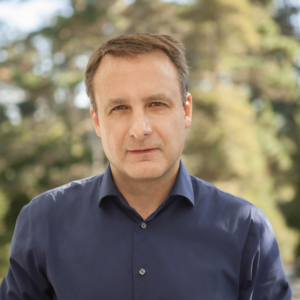 Dr. Jonathan Foley is a world-renowned climate scientist, sustainability expert, and public speaker. He is the executive director of Project Drawdown — an international initiative to compile the 100 most effective ways to reduce the impacts of the Climate Crisis. These pathways to a sustainable future include obvious technologies like wind turbines and solar panels but also unexpected highly effective transitions to greener air conditioning systems, reduction of food waste and a plant-rich diet. More details can be found here.
Foley’s groundbreaking work has led him to become a trusted advisor to governments, foundations, non-profits, and business leaders around the world. He and his colleagues have made major contributions to our understanding of climate change, ecosystems, food systems, and the sustainability of the world’s resources. He has published over130 peer-reviewed scientific articles, including many highly cited works in Nature and Science. He is among the top 1 percent most-cited scientists in the world.
A noted science communicator, his presentations have been featured at hundreds of international venues, including the Aspen Institute, the World Bank, the National Geographic Society, the Chautauqua Institution, the Commonwealth Club, the National Science March, and TED.com.
​He has taught at several major universities on topics ranging from climate change, sustainability solutions, and fixing the global food system. He has also written many popular pieces in National Geographic, the New York Times, the Guardian, and Scientific American. He is also frequently interviewed by international media outlets, and has appeared on National Public Radio, the PBS NewsHour, the BBC, CNN, and in the New York Times, the Guardian, the Washington Post, WIRED, the HBO documentary on climate change “Too Hot Not to Handle”, and the film series“Let Science Speak”.
Foley has won numerous awards and honors for his work, including the Presidential Early Career Award for Scientists and Engineers, awarded by President Clinton; the J.S. McDonnell Foundation’s 21st Century Science Award; an Aldo Leopold Leadership Fellowship; the Sustainability Science Award from the Ecological Society of America; and the National Science Foundation’s Faculty Early Career Development Award. In 2014, he was also named as the winner of the prestigious Heinz Award for the Environment.
Before joining Project Drawdown, Foley led a number of world-leading environmental science and sustainability organizations. He started his career at the University of Wisconsin, where he launched the Center for Sustainability and the Global Environment (SAGE) and served as the first Gaylord Nelson Distinguished Professor of Environmental Studies. Next, he was the founding director of the Institute on the Environment (IonE) at the University of Minnesota, where he was also the McKnight Presidential Chair of Sustainability. Then he served as the Executive Director of the California Academy of Sciences, the greenest and more forward-thinking science museum on the planet.
Originally from Maine, Foley enjoys nature photography, hiking, kayaking, and exploring new places. He lives in San Francisco.